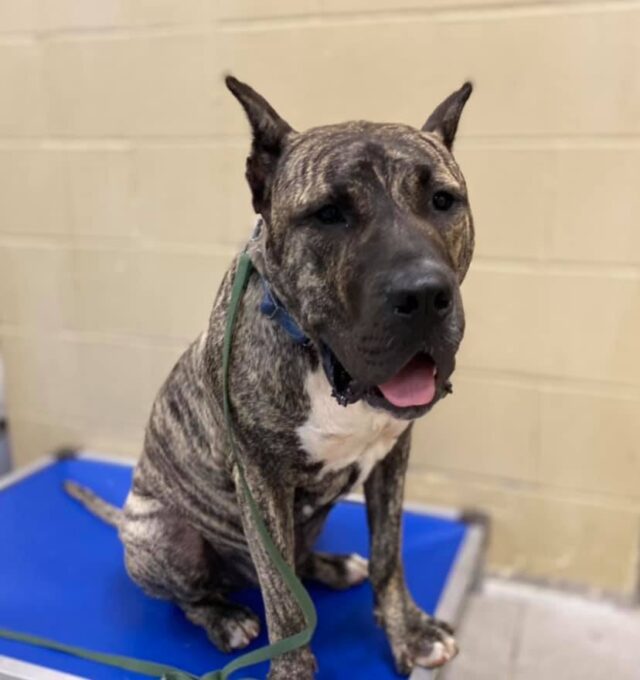 Ethan the rescue dog has become a social media star after enduring a painful past and making a miraculous recovery. When the Kentucky Humane Society first found him, he was abandoned in a parking lot and 50 pounds underweight. But after reaching a healthy weight and maintaining a positive attitude, Ethan was adopted by the facilities director of the shelter. Ethan has had many challenges even after getting adopted, but his loving family has helped him through them.

He will likely always have lasting effects from his past trauma. But in a recent update, the family shared that the beloved rescue dog is doing well!

A Series of Setbacks

Sweet Ethan has had one successful day after another, thanks to the many people who believe in him. But in July 2021, his family revealed that he suffered a major setback. Halfway through the month, Ethan had seizures almost daily. His family worked closely with vets to find an explanation.

After a neurology appointment and an MRI, vets determined that the seizures were caused by past trauma. He has several lesions, along with additional brain damage in his frontal lobe. The extreme starvation he faced before being dumped at the shelter led to the recent seizures. So, Jeff Callaway, Ethan’s dad, gave him medication for his seizures right away.

At first, nothing seemed to work. But after trying multiple treatment methods, Ethan showed some improvements. He had a few good days in a row, which eventually led to no seizures at all. One of Ethan’s most recent Facebook updates shared a positive outlook on how well he’s doing.

“First and foremost, Ethan is doing very well. His loving personality and joy for people is back in full swing and he continues to bring smiles and happiness to everyone we run across. His seizures seem to be gone for now. But we monitor his health so closely every day,” a Facebook post reads.

As usual, Ethan continues to inspire his many fans. He gets to come to work with Callaway, where he has his own bed to rest in. He also gets endless amounts of love from vets, employees, and volunteers. He’s been getting to go out and do some of his favorite things again, including visiting dog-friendly breweries. After all, he is the “chief tasting officer” for Busch’s dog “beer.”

“Thank you to everyone for their fantastic support. I can’t say it enough, Ethan has the best extended family in the world. I think if there was anything Ethan needed, someone in his family would step up. Thank you for your understanding and patience as posts slowed down so we could focus all our attention on Ethan’s health,” the Facebook post added. “Thank you to the Kentucky Humane Society who support Ethan and myself everyday!! Just because he’s been adopted hasn’t meant their support has stopped. They are an amazing organization filled with amazing people whose sole focus is to make the lives of animals better. I’m proud to be able to play a part in that mission.”

Ethan might always face more struggles than other rescue dogs, but he’s fortunate enough to have many loving humans to help him through it. He is a brave pup and an inspiration to all!