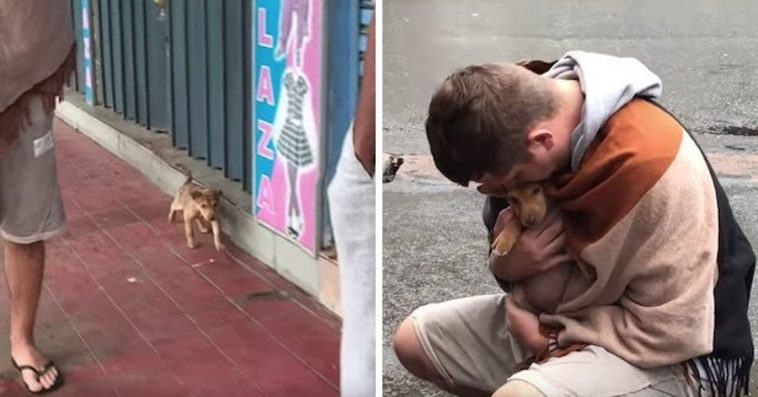 She was inviting someone to see her. That’s when a group of strangers walked by…

A stray puppy’s persistence paid off when she refused to be left behind after she caught the eye of a group of rescuers who usually save elephants.

The small puppy was trying to survive in the coldest city in Sri Lanka, living at the market at the time. She would wag her tail every time someone passed her, trying to get someone to notice her. That’s when Lek Chailert and some fellow rescuers from Elephant Nature Park noticed her.

Elephant Nature Park in Thailand is home to elephants rescued from all kinds of hardships and situations. The group happened to be in Sri Lanka for an elephant research trip and were passing through Nuwela Eliya when they came across the puppy.

“In the market through fare, where thousands of people pass, we saw a little puppy wagging her tail at passersby, inviting people to take note of her.”

“One by one people rushed unaware of the pup’s plight. Our team stopped to pat her for awhile, but we also were in a rush to go. She began to follow us, and quite far, until we lifted her up and returned her to where we first met her. She followed us again and again, until her determination won our hearts.”

Even though they were far from home, Lek and her friends set out to help the tiny puppy. But it proved difficult.

“We decided to ask people who walked past to adopt her, to take responsibility for her care. When they saw that she was female, they lost interest.”

They were running out of options, when it occurred to them to ask someone close by.

“Finally we asked our driver, Thushara, to look after her for us. He agreed.”

We bought a new blanket for her and bathed her, turning our luggage into her bed while she stayed with us in the hotel.

I think that this was the first night that she can sleep warm and peaceful.

They named the dog Lek Lek. That was three years ago. So how is Lek Lek now?

She is healthy and happy with Thushara and his family. And she still recognizes Lek even after three years.

Big or small, rescuers change lives because they acted. Lek Lek’s rescuers conclude, “We can always change one life from our care.”

Watch the heartwarming reunion of Lek Lek with her rescuers in the video below.