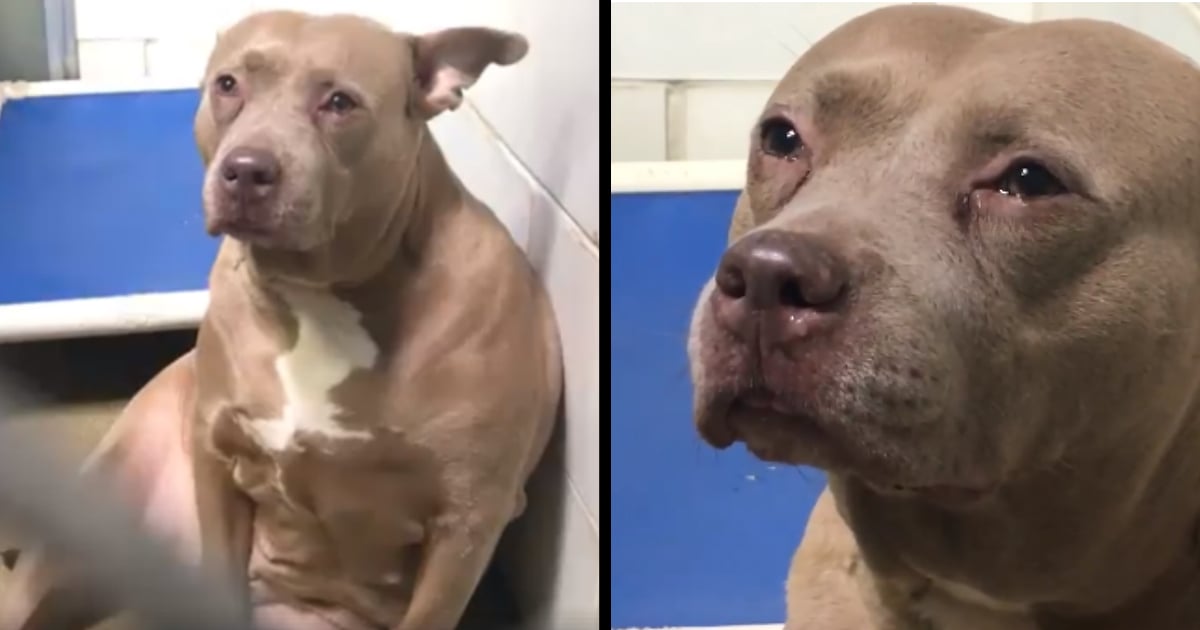 Every time I stopped to talk to her and say I was sorry her eyes would fill with tears.” But make sure you watch the last video, trust me, it’s worth it!

The volunteer for Great Charlotte SPCA spoke with the shelter and learned that Cinnamon was most likely used as a breeding dog, but at 7 years of age and overweight, maybe her “owners” deemed her no longer useful.

“Someone dumped this poor mama at the shelter, minus her babies,” Sleime wrote on Facebook. “Every time I stopped to talk to her and say I was sorry her eyes would fill with tears (check out reaction at -:13). Heartbreaking!!”

She posted the video of Cinnamon and it quickly went viral, and she was soon flooded with offers to adopt her. But Cinnamon would find a family close to home when a good friend of Sleime said she wanted her family to meet Cinnamon.

“I have a special place in my heart for pit bulls,” Meghan Shelton told The Dodo. “I think they’re a very misunderstood dog and a misunderstood breed. And when I saw her in that video, literally crying in a cage, I cried. My kids cried. I showed my husband, and he said we could go look at her tomorrow.”

The moment Shelton and her family met Cinnamon, her tail wouldn’t stop wagging and her face just lit up with happiness.

Sleime caught this moment on video too. In it, you can see Cinnamon look around the room with a smile on her face. It’s as if she knows she won the jackpot and just doesn’t know who to kiss first!

The Shelton family knew Cinnamon – who they renamed Rosie – was meant to come home with them. The family already has a Pit Bull – a 3-year-old male named Blu. They told the Dodo they weren’t sure how Rosie and Blu would get along and planned to introduce them to each other slowly.

But the two dogs were too impatient and whined to meet the other. As soon as they did, they acted like they’ve known each other for years. Shelton says Rosie has worked her way into their hearts and they already can’t imagine life without her.

As for Sleime, she’s happy she was able to get Cinnamon her happy ending.