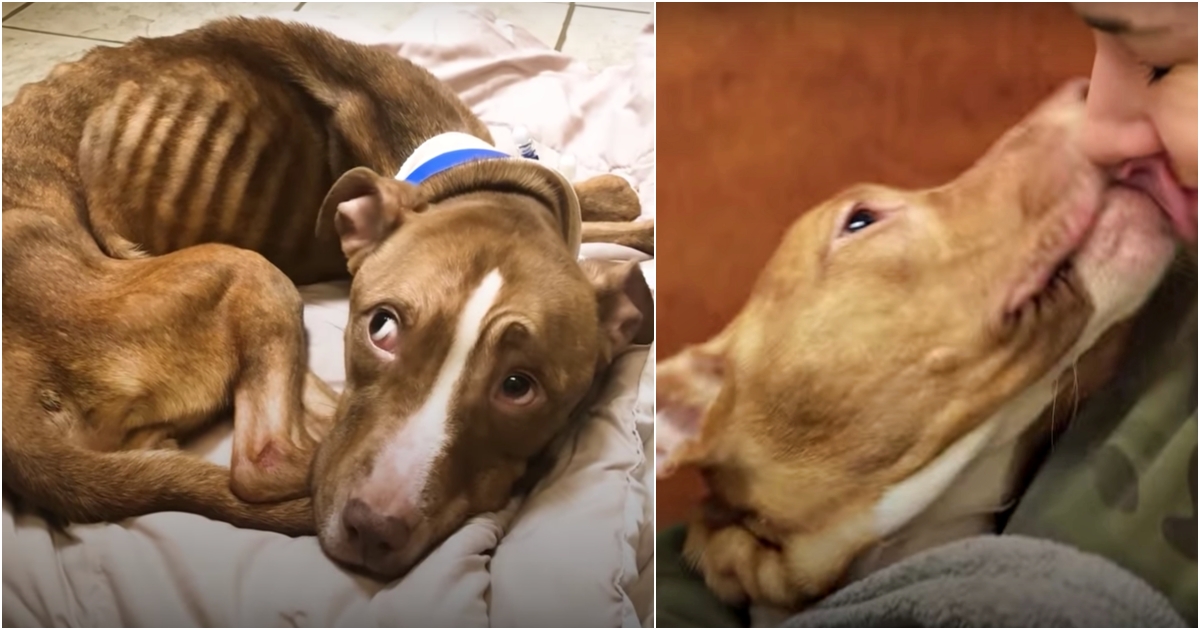 No one was sure how she was still hanging on. Maybe she understood that love was so close, she just had to wait a little longer

Reese was found lying on a sidewalk. No one had any idea how this poor baby was still alive. Her body was so severely emaciated that you could clearly see every bone in her frail body. How could anyone allow this to happen? How could anyone do this to her?

Animal Control was called in and they reached out to a local rescue, called Jersey Pits, hoping they could save her life. They sent over a photo of the dog lying in the back seat of their car. Everyone who saw the photo broke down and cried. This was the worst case of abuse and neglect they had ever seen.

Even when she was too weak to lift her head up, she was happy to thank her new human friends with lots of kisses. To say she was a loving dog was an understatement. No dog deserves to suffer but to see a dog like Reese who obviously has so much love to give be deliberately starved is beyond cruel.

The medical team took the necessary steps in order to get Reese better. She needed a lot of care. A week into her hospital stay, she was able to stand on her own for a very short time. It was a small feat, sure, but it was something!

A few weeks later, Reese was taking steps on her own. She was wagging her tail and even “sitting” on command. After a month-long hospital stay, she was discharged to go to her medical foster home.

Ryn, Reese’s foster mom, said that she was very timid in the car ride but as soon as she came inside her foster home and saw that she was safe, she “came alive.” She picked up toys and happily ran around with them. For the first time, Reese was inside a house where she was wanted and cherished.

And then, in a blink, Reese transformed into a ‘real dog.’ She would jump on the couch and ask for pets and playtime. Once she was healthy enough to go on walks, she truly blossomed. She realized there was a whole outside world waiting for her to discover.

Ryn explains in the video that every morning they would wake up and she would have to loosen Reese’s collar. It was such an amazing accomplishment because that meant Reese was gaining weight and getting healthier!

Reese continues to get better and gain weight. She’s still living with Ryn as she heals. Soon she will be available for adoption and everyone who meets her is confident she will make a wonderful addition to any family.

We are so relieved Reese was found in time and brought back to life. Thank you to all the animal heroes who didn’t give up! Please take the time to see Reese’s complete story beneath the article. She is so inspiring!

Please ‘SHARE’ to pass on this story to a frie